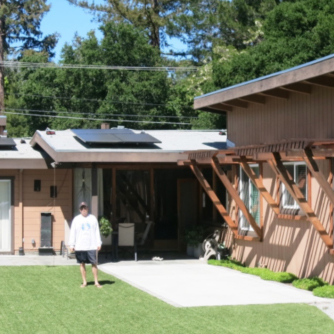 Don Zulaica, Menlo Park resident, tells his story: Global thoughts start with local acts. Mine center around the Eichler-ish Sharon Road house my mother bought in 1979. From La Loma (pre-Phillips Brooks) to Las Lomitas, La Entrada, Menlo-Atherton and Santa Clara University, it was the anchor. Now, my girlfriend and I already had some earth-friendly habits – supporting local farmer’s markets, using electricity off-peak, short showers, recycling, etc. – but the big-ticket items were borne out of a life change.

Over a decade ago, when I returned home to help my mother with health issues (including breast cancer and subsequent diagnosis of multi-infarct dementia), the world turned upside down. I’d attained what essentially was a dream job, managing editor of a national music magazine. However, being the only child of a single parent, the schedule wasn’t sustainable, and responsibilities shifted to her.

While that took center stage, a unique situation presented itself: the house I grew up in, with its dilapidated, cigarette-smoke-stained walls, a pool that hadn’t been properly used (or cared for) since the Reagan administration, and other myriad ailments, was ripe for rebuild.

For the next several years, slowly, incrementally, I worked with an incredible array of people that understood my familial responsibilities, and helped do everything from bathroom/kitchen remodeling, electrical re-wiring, plumbing re-piping, drainage system installation, and rot repair, to the long-term environmental investments of removing the large backyard pool and substituting artificial grass and water-friendly landscaping, replacing sick/dead trees, updating windows, installing proper wall insulation and new A/C unit, and the coup de grace – rooftop solar panels.

The windows, insulation, and A/C have made summer heat and winter cold much more bearable than the weekends when I was watching Eddie Murphy on Saturday Night Live, but the real jewels are the dry landscaping and solar panels. The spacious backyard is almost a complete swath of green that needs neither watering nor maintenance, and so far the panels have cut the PG&E bill in half, year-over-year. With tactical adjustments, that should improve, and with the federal-tax rebate factored in, the system will eventually pay for itself. Not only is the house more economically and literally comfortable, its carbon footprint shrunk several shoe sizes.

Didn’t expect it to turn out this way, especially seeing newer residents razing and building state-of-the-art edifices, but looking back I remember that the general idea was to make this old house nice to sell, but possibly irresistible to leave.  Whatever happens, nobody loses.